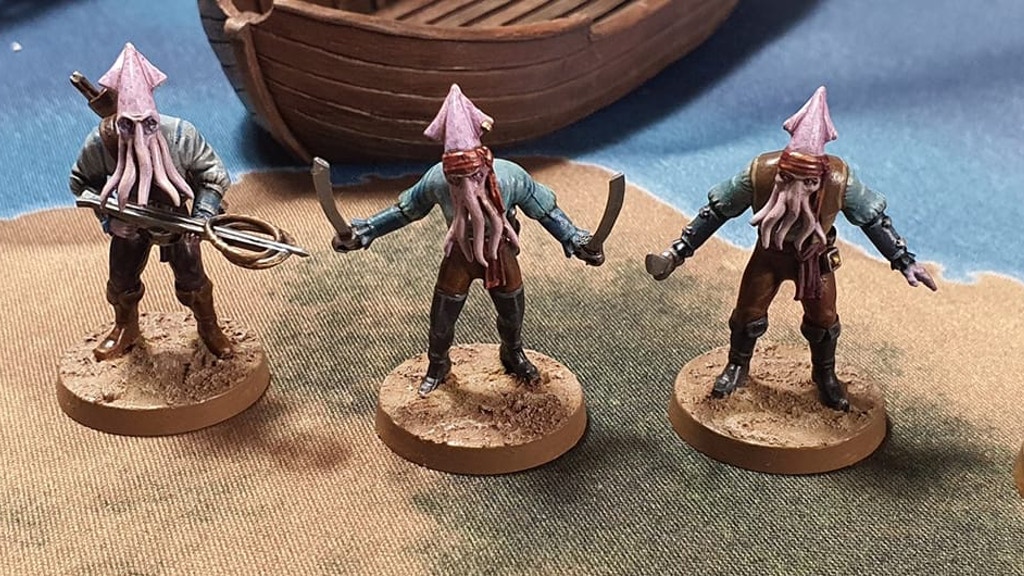 Pirates of the Dread Sea: Orc, Goblin and Skrier Pirates

Created by Mike and Rich Chappell

Orc, Goblin and Skrier Pirate Crews for use with Pirates of the Dread Sea and other games! 35mm scale metal miniatures

Latest Updates from Our Project:

Ahoy me hearties! I'm sorry it's been so long, there were some things we needed to sort out but fingers crossed most are now sorted. The main new is this:

The Metals Have Arrived

The vast majority of your pledges have now been produced in metal and we can start shipping them. Huzzah!

We've had issues with a couple of miniatures that just didn't cast well - none of the main crews, as we had all of those tested before the Kickstarter - but a few of the add-ons. The biggest problem was with the Gorgon, who simply refused to keep all of her snakes on her head.  We also had some issues with some of the ghosts

You may recall - equally you may well have forgotten, that the plan was to have 4 Ghosts but we only had 1 finished at the time the campaign ran. The sculptor booked to finish the ghosts has been unwell, but is now back at work and has finished the remaining Ghosts. Huzzah again! Unfortunately I am concerned that if I send these for casting there will be another substantial delay (mainly due to covid and the way the manufacturer has to work)

We will now be providing the Gorgon miniature and the ghosts in 3D printed plastic. I totally understand  that this is now what you all pledged for but, it solves the issues quickly, and in the case of the Gorgon I think it's the only solution. I also wouldn't do this if I did not think we could provide high enough quality 3D prints. We can. Here are some of the fairies and trolls which we printed to have painted whilst waiting for the metal versions:


I hope you'll all be happy with what you receive.

In the first instance you will all receive the expansion "Hunted" as a PDF. We will send the printed versions at a later date but they are not ready and we want to send your miniatures out. Whilst I'm not going to pretend this is good news, it does at least give us some opportunity to take feedback before the physical print.

Thanks as ever for your patience and support

Ahoy me hearties! I've had a couple of requests for an update so just thought I would re-iterate that the majority of miniatures are now being manufactured and we are simply waiting - this is definitely taking longer than usual and is down to a smaller number of staff being able to work int he factory at the same time. I'll update more when there is further news.


You may have noticed that we have previously offered STL (3d printable files) of anything you have backed for in this campaign to be shared with you for free. This offer still stands. Additionaally we have decided to make EVERYTHING for Pirates of the Dread Sea available as 3D printable files via a new Kickstarter campaign which will be launching soon and can be previewed here:


One of the reasons for doing so is that we know some people will have been put off by high shipping costs from the UK to their part of the world, another is the increase in relatively affordable 3D printers, and another is, frankly,  we could do with a boost to sales. Normally we would have taken POTDS to conventions and shows and clubs all over the UK and demoed it to anyone interested, and word of mouth may have lead to more sales, but due to the pandemic none of that has happened, For us to be abe to crack on with more crews and expansions, we could do with some more players - so if you know anyone with a 3D printer, please do share that link with them!


Apologies once again for the ongoing delays, and thanks, as ever, for the wonderful support.

Hello everyone, and I do apologise for not updating before - I really didn't realise how long it had been. Today the manufacturers confirmed that the master moulds of most of the miniatures are complete, which means a full production run can begin,  and heopfully I'll be able to show you some metal miniatures really soon! And then ship them to you! Whilst I know that Covid is still having an impact at the casters, I now hope that we will be shipping in weeks, not months.  More as soon as I have it!


Thanks for your ongoing support

Good morning crew! A few people have requested an update, but unfortunately there isn't an awful lot to say. The master sculpts are all with our manufacturer and in a queue awaiting production. The manufacturers are open and working a skeleton crew over shifts to keep themselves safe. Obviously this slows things down and they produce miniatures for a huge proportion of the UK metal miniatures market, so there's going to be a significant backlog for them.

Whilst I await the metal miniatures I've home printed some bits and bobs for painting up, heres an example of one of the Dread Sea Trolls which you were able to add to your pledge via backerkit:

If any of you have your own 3d printer I'd be happy to send any files (assuming I can find them) for what you pledged for to you whilst you await the metals - drop me an e-mail at info@deadearth.co.uk if you'd like to get any.

In the meantime the "Hunted" supplement is ready bar some editing and "prettying" up.

That's about it for now, apologies for the continued delays, I'll be back in touch as soon as there's more news.

Ahoy crew! Apologies for the lack of update - there hasn't been an awful lot to say, but here's where we're at:


Although our manufacturers have been forced to change the way they work and this has slowed the process down, the vast majority of our miniatures are now in the queue waiting to be manufactured and sent out to you all.

Here are the final production quality prints which will make the masters:

We also have some artwork for the Hunted campaign/rule supplement

We'll keep you updated as to when we're likely to be able to ship as soon as we can.


In the meantime, you've likely noticed we have another Kickstarter on the go. This hasn't impacted on the delivery of THIS project as the sculptors and producers are different and the projects are parallel rather than either taking precedent to anyone.

If you haven't seen it yet, it's called The Drowned and the Damned and takes the world of Pirates of the Dread Sea to fleet level!

Check it out here: http://kck.st/2IXjGVi


It would be great to see some (more) of you there.


I hope everyone is keeping well and apologies for the delay. Hopefully thing shouldn't take much longer now.